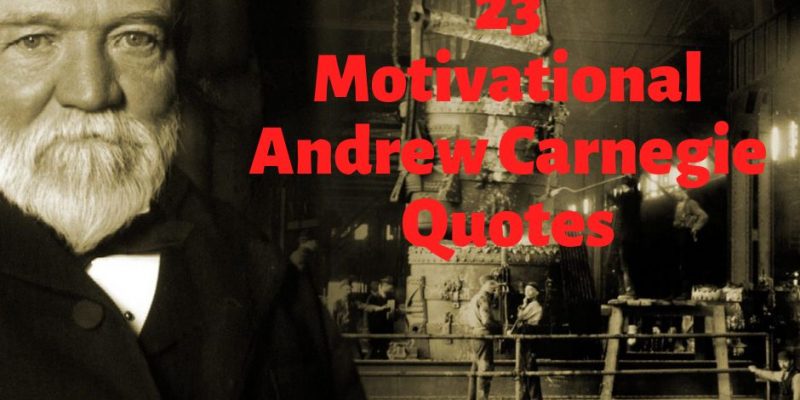 Andrew Carnegie was the highly successful businessmen and reputed philanthropists in today’s history. In the American steel industry, his entrepreneurial ventures earned him billions and, in turn, he made amazing contributions to social causes like education, public libraries, and international peace. He’s responsible for donation and construction of around 2,509 public libraries across the world, especially in Europe and the United States.

What do you need to know about Andrew Carnegie?

Andrew Carnegie was a tycoon of the Age of Steel. This empire generated raw materials to build physical infrastructure in the US. He was the catalyst in the Industrial Revolution since he produced steel to make big machinery & transportation possible across the nation. He made some very big contribution to the United States and has earned this respect by his hard work and dedication.

Later on in his life, he shifted his focus from industrialism to philanthropic life. He became the benefactor to education because he was responsible for construction & donation of around 2,509 public libraries across the world.

Andrew Carnegie was the self-made steel icon and wealthiest businessmen of his time. He dedicated his entire life to philanthropic endeavors. He led an enormous expansion in the American steel industry in the late 19th century and he was the well-known important philanthropists of the 19th century.

Born in Scotland, Carnegie moved to the US in 1848. His only aim in life was to work hard and it can be demonstrated by his entire life’s work that started while he was just 13 years. He identified some great opportunities and invested his money and time in making it successful. Another amazing venture was growing railroad industry and he invested his resources in steel and oil. Eventually, Carnegie Steel Company got formed and he shared his wealth and success through the creation of Carnegie Corporation that exists even today. He had a strong belief in the free public libraries that he created by his generosity and wealth. It is reported that in his entire lifetime, Andrew gave away more than $350 million of wealth just to help others.

Also Read: 5 Smart Ways to Motivate Yourself to Workout – Get Into The Beast Mode

His philanthropic endeavors are quite extensive in the value. There’s no doubt Carnegie was the hard businessman and his success is a testament for this, however, his wealth acquisition wasn’t because of any personal greed. He believed that the wealthy had the obligation of serving as the stewards to society. Two causes that Carnegie had an amazing passion were education & international peace.

Earlier, he used to think that everybody was entitled to the proper education. And for this reason, Andrew got involved with the founding of several schools and universities. One more way that he contributed to public education was by his interest in the free public libraries and many other ventures. His love for reading stemmed from the positive experience of reading since childhood from the personal collection of the merchant in his town. Andrew wanted to make the same reading habits and experiences accessible to all people without any charge. He’s responsible for the establishment of over 2,500 libraries all over the world. The first of Carnegie libraries were Carnegie Free Library located in Allegheny, Pennsylvania that became a model for thousands of libraries.

Second philanthropic focuses of Carnegie was an idea of peace in all nations. And he established several trusts, which focused on researching causes of war. His greatest contributions in this cause were the establishment of Peace Palace in Hague that houses an extensive library of the international law resources.

Andrew believed that by working hard & taking calculated risks will bring him positive results. He invested in vertical markets. It means he did not only buy steel ingredients and produce it in his own factories. He owned other elements of the steel industry that includes fuel to coal mines the steel furnaces, ships, and trains to transport his steel as well as iron ore operations and more.

Andrew felt that to be rich was just one part of life. Now he got rich and he decided he must spend the rest of his time giving away his wealth to the needy causes. And his most favorite cause was public libraries. Carnegie’s funding contributed more than 1,600 libraries built over the US and across the world. He gave away money to aid with the education and funded building of the Carnegie Mellon University located in Pittsburgh. Some other projects included buying church organs, building the Carnegie Hall in NY City, and forming Carnegie Foundation for Advancement of Teaching.

Level of philanthropy done by Carnegie during his entire lifetime and more has been the main foundation for the traditions of philanthropy. He started his first efforts toward modern-day trust or foundation. And his call to responsibility and challenge to affluent people to pass on their wealth drew the attention of others do the same thing, which includes John Rockefeller & W.K. Kellogg.

1. “As I grow older, I pay less attention to what men say. I just watch what they do.” 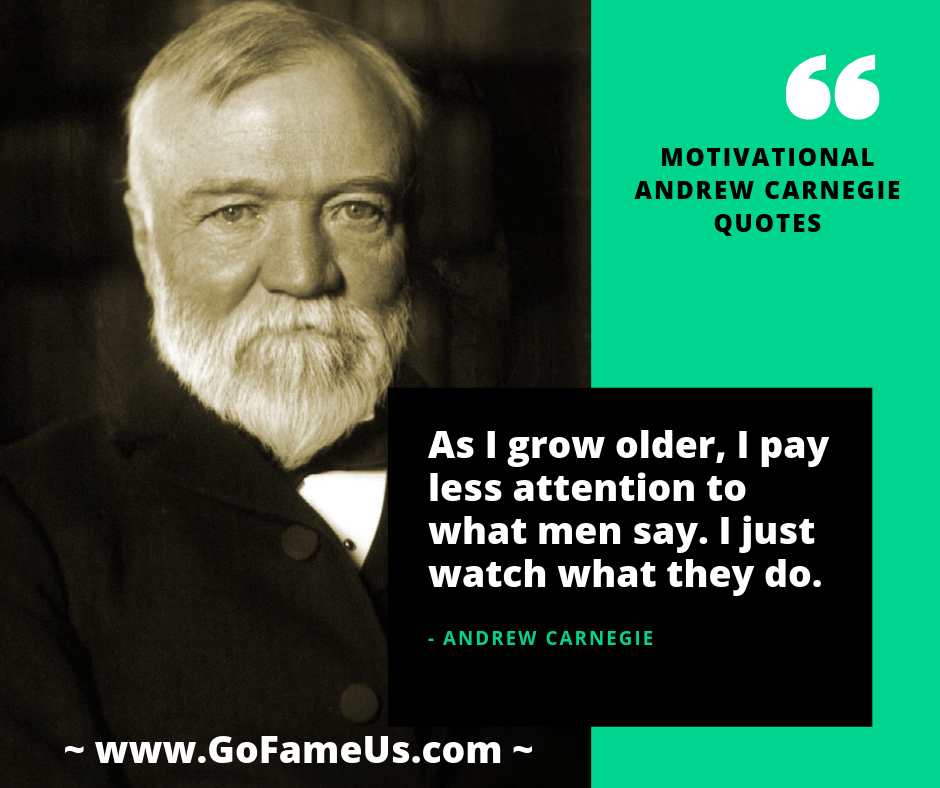 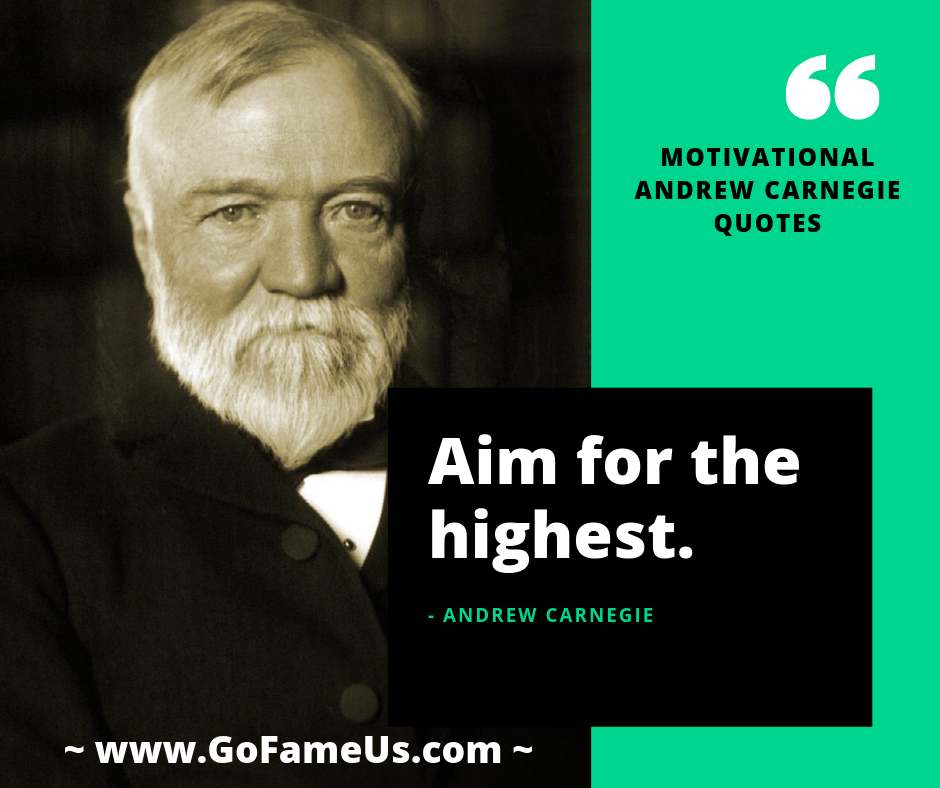 3. “Do your duty and a little more and the future will take care of itself.” 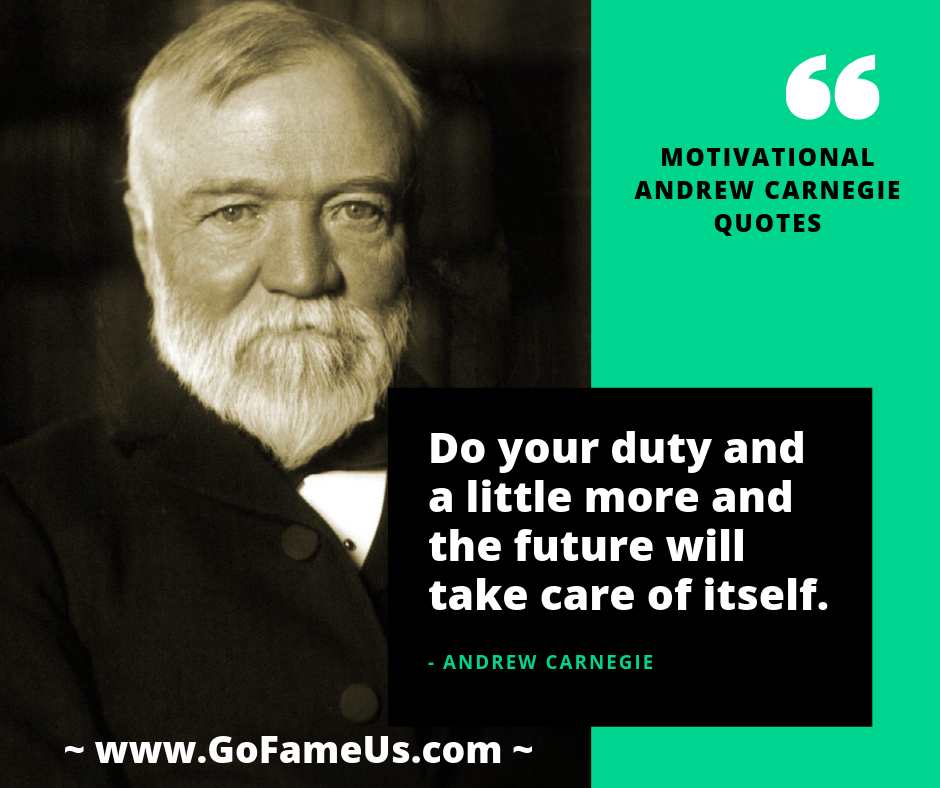 4. “Surplus wealth is a sacred trust which its possessor is bound to administer in his lifetime for the good of the community.” 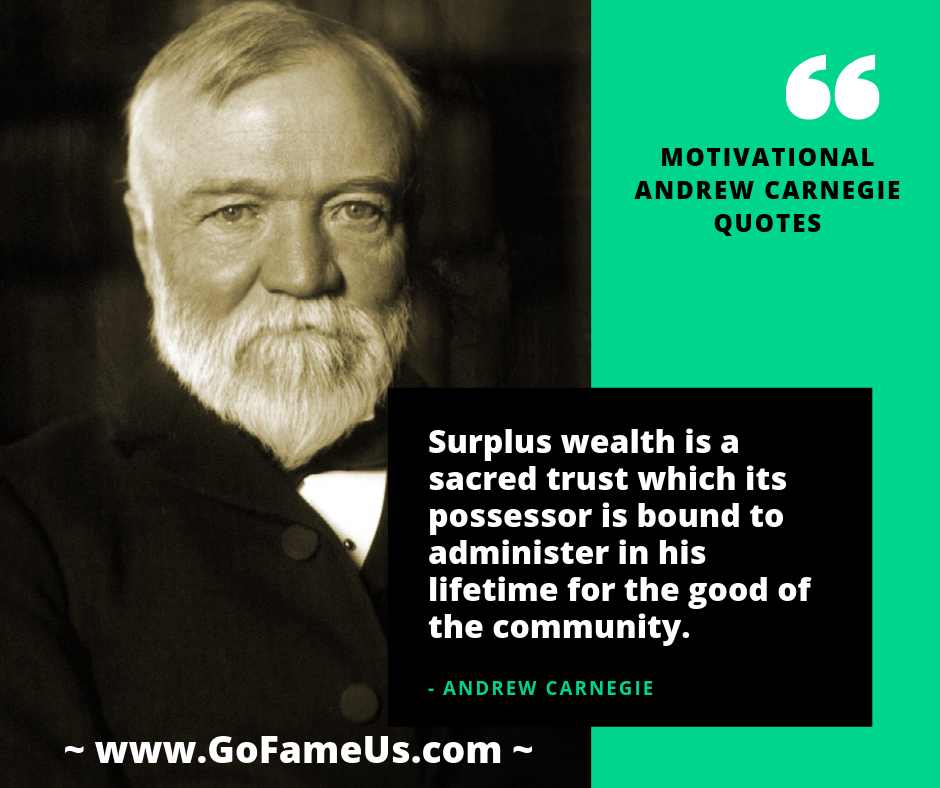 5. “All honor’s wounds are self-inflicted.” 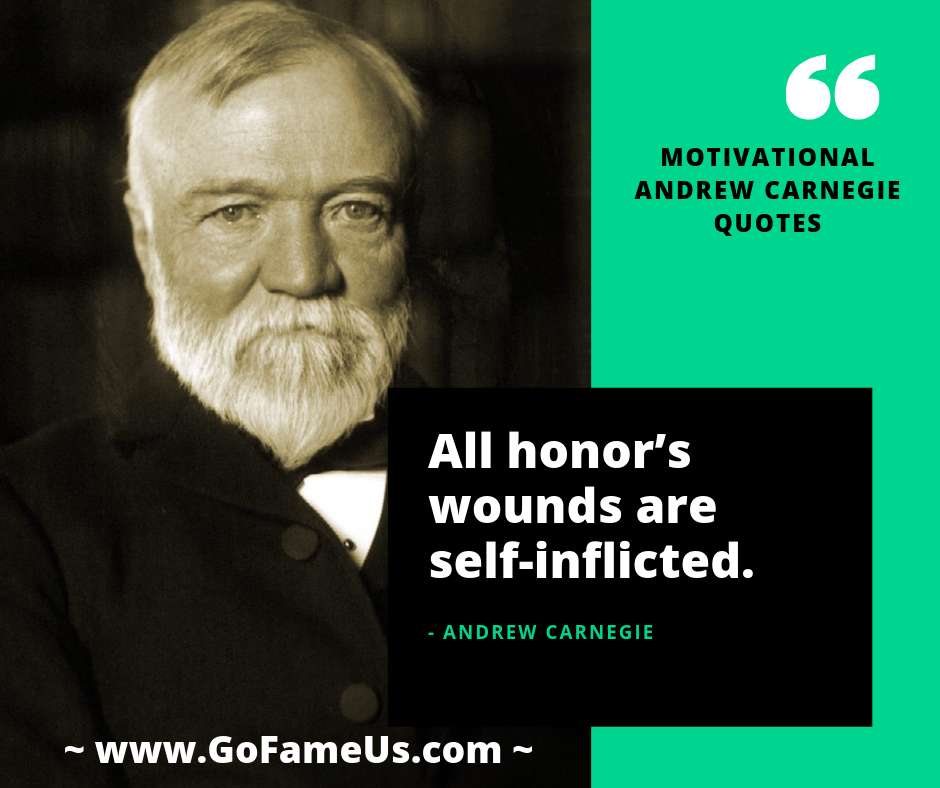 6. “The man who acquires the ability to take full possession of his own mind may take possession of anything else to which he is justly entitled.” 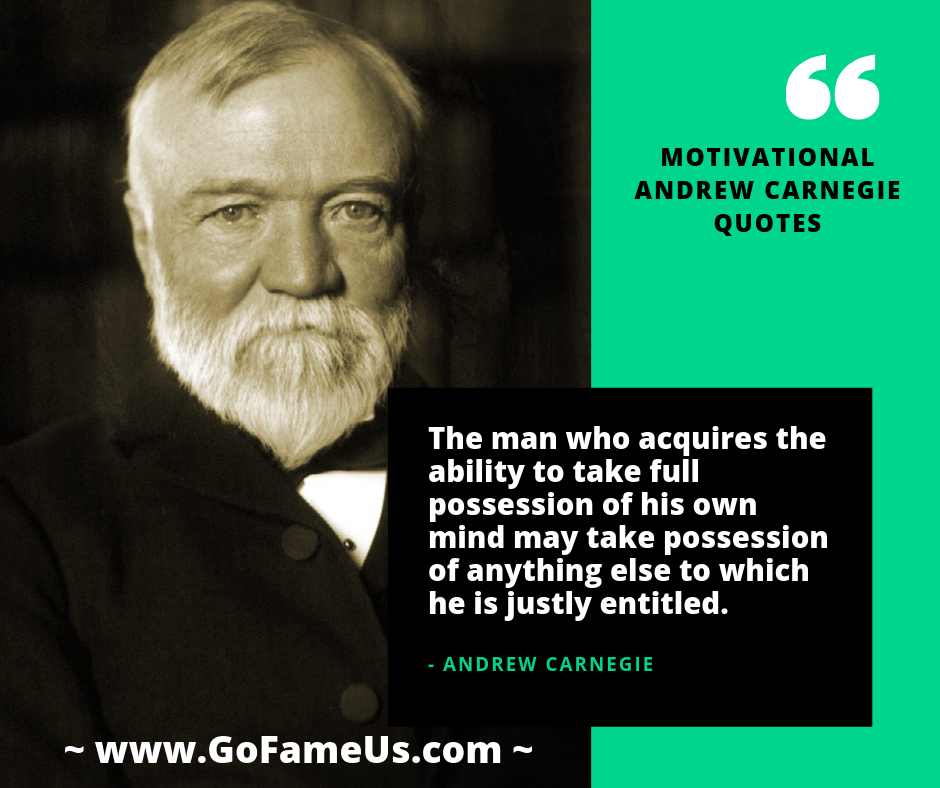 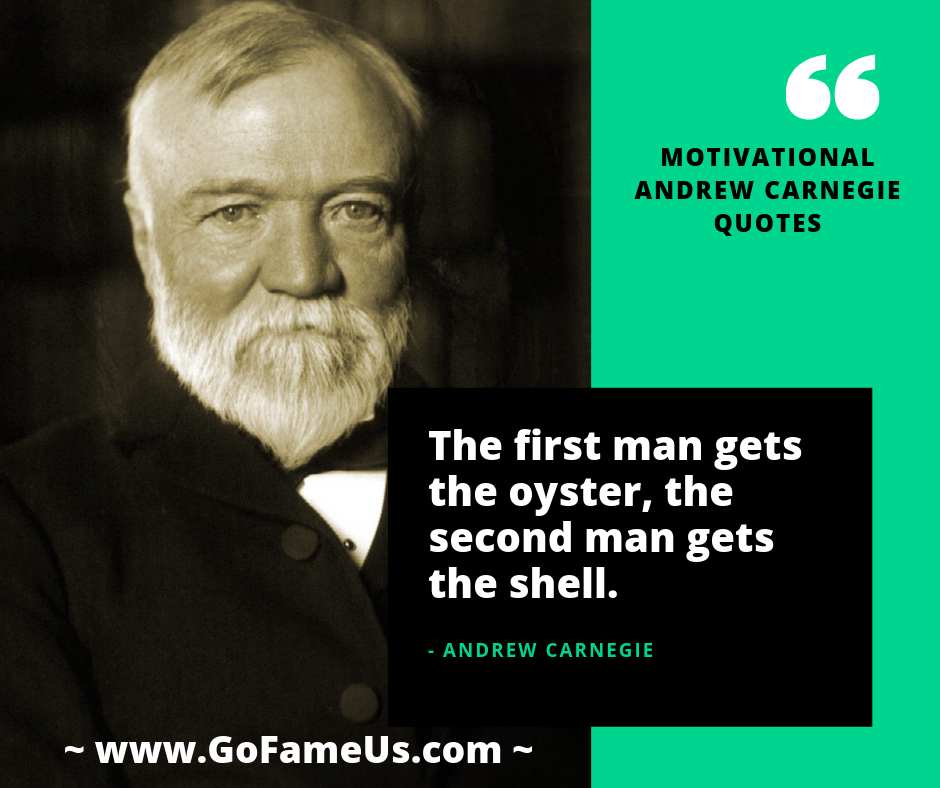 8. “There is no way of making a business successful that can vie with the policy of promoting those who render exceptional service.” 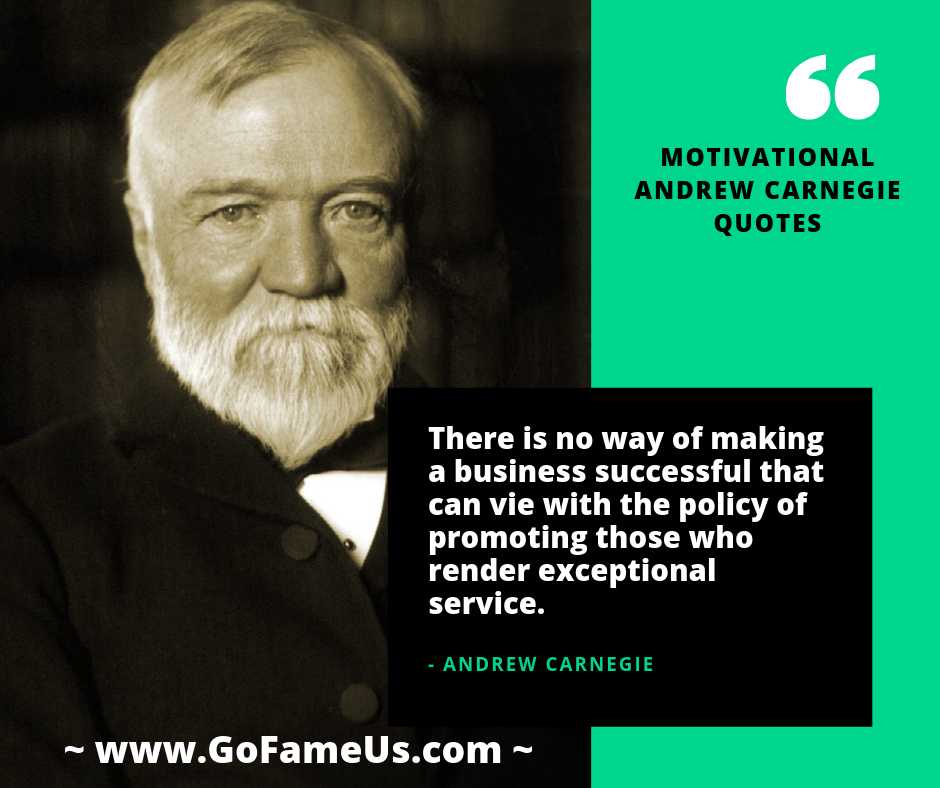 9. “I have had a long, long life full of troubles, but there is one curious fact about them-nine-tenths of them never happened.” 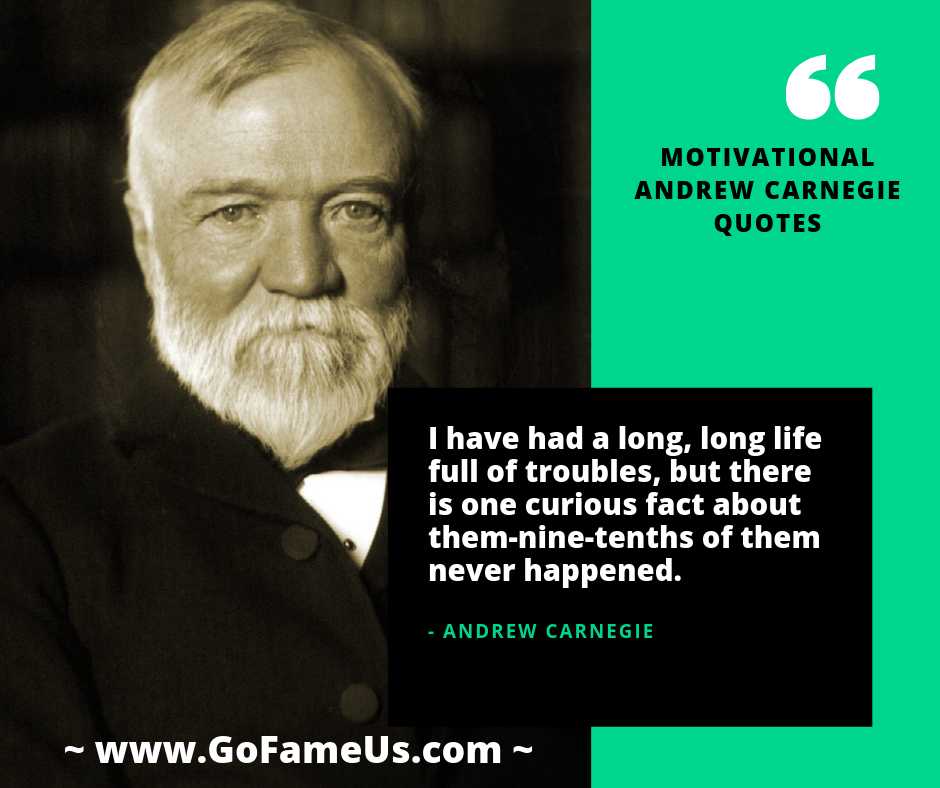 10. “Wealth is not to feed our egos but to feed the hungry and to help people help themselves.” 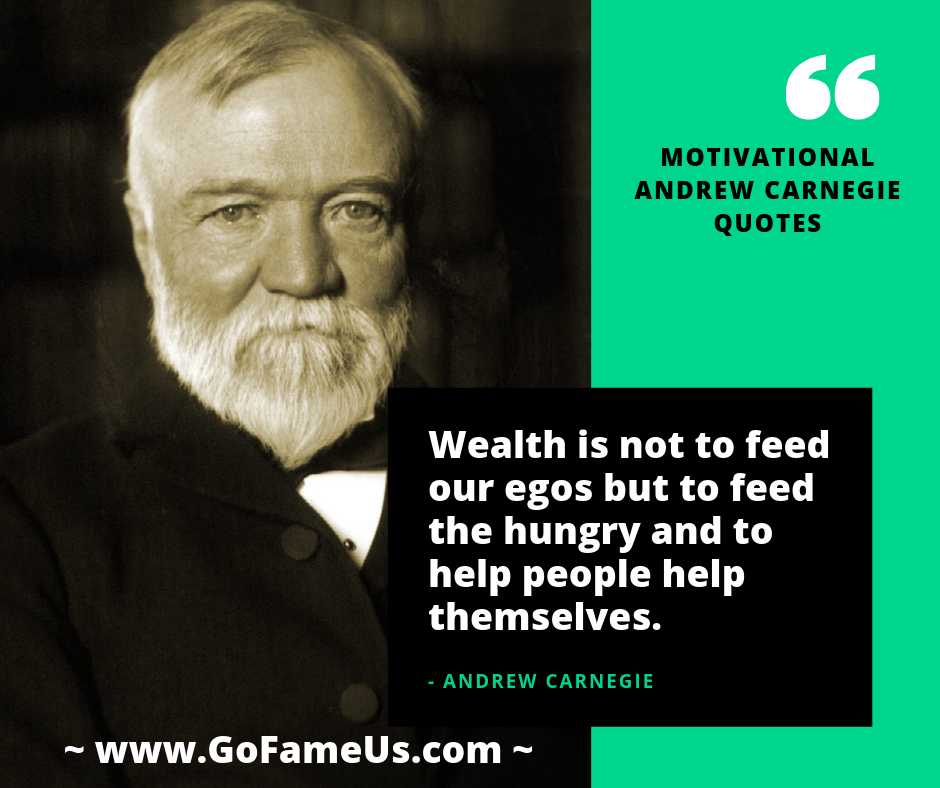 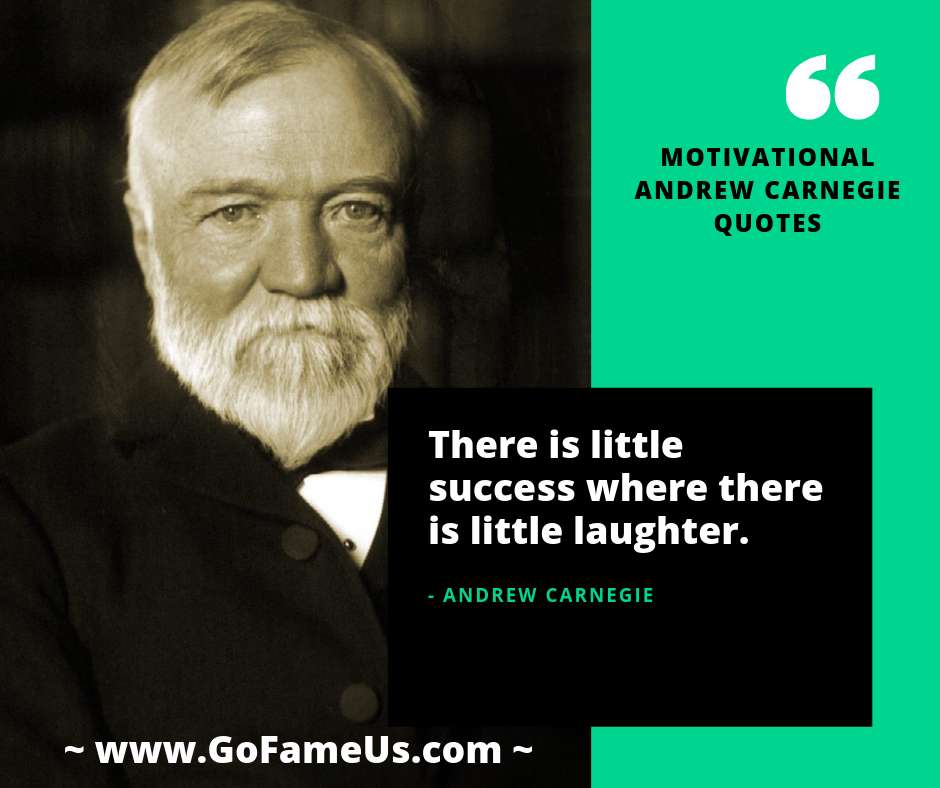 12. “No man can become rich without himself enriching others.” 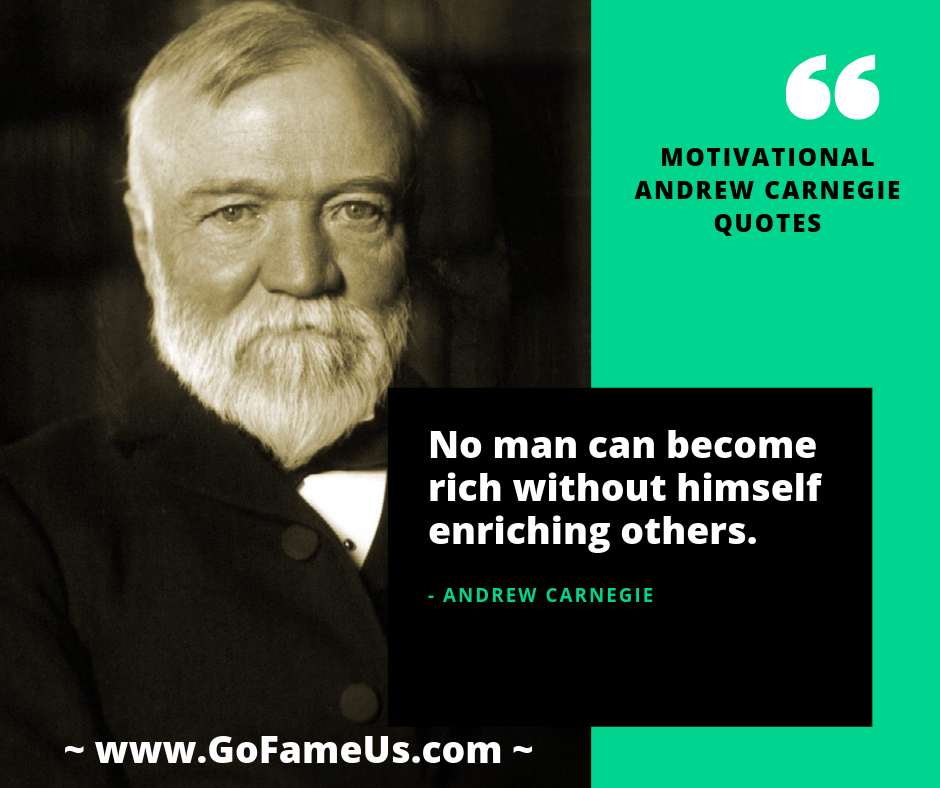 13. “Teamwork appears most effective if each individual helps others to succeed, increasing the synergy of that team; ideally, every person will contribute different skills to increase the efficiency of the team and develop its unity.” 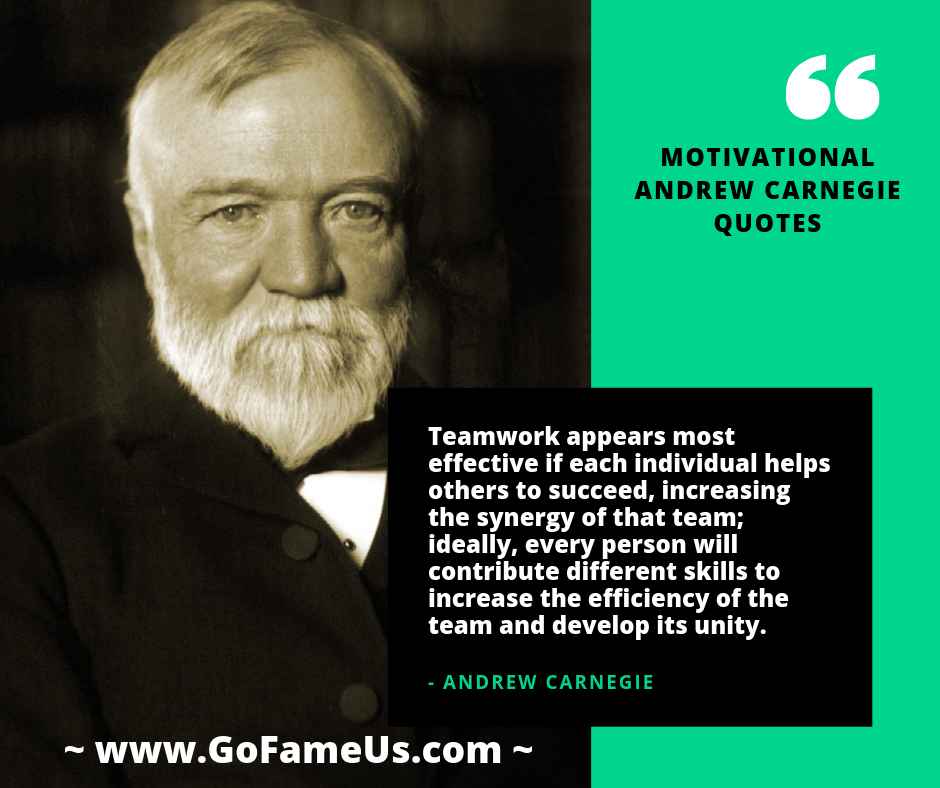 14. “Don’t be afraid to give your best to what seemingly are small jobs. Every time you conquer one it makes you that much stronger. If you do the little jobs well, the big ones will tend to take care of themselves.” 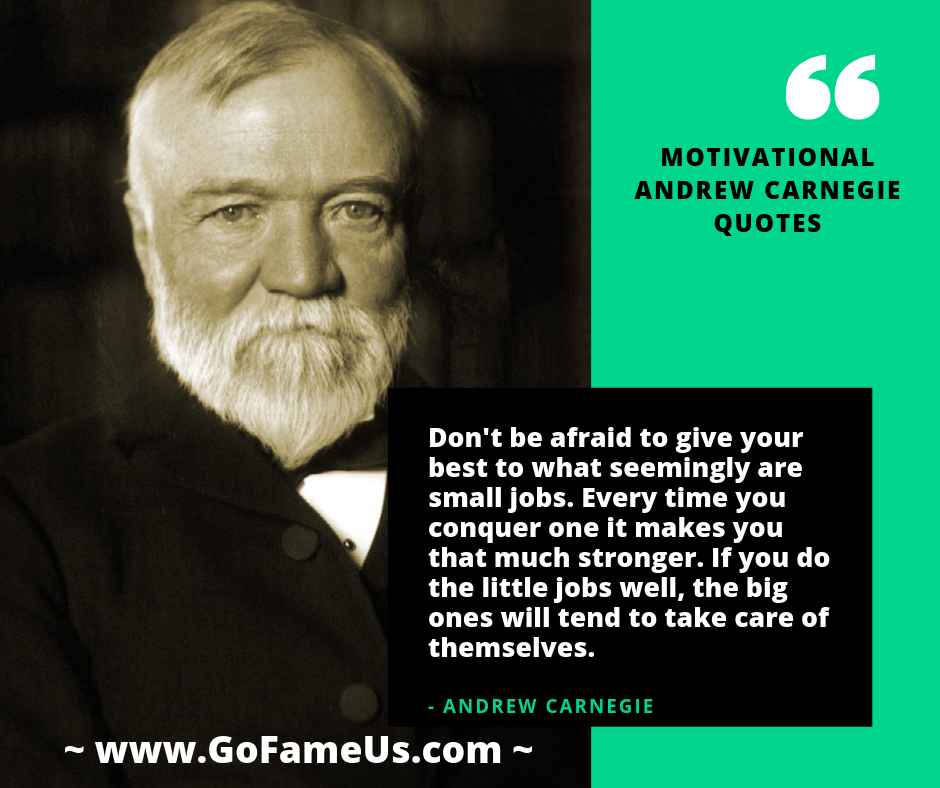 15. “The experienced in affairs always rate the MAN whose services can be obtained as a partner as not only the first consideration but such as to render the question of his capital scarcely worth considering, for such men soon create capital; while, without the special talent required, capital soon takes wings.” 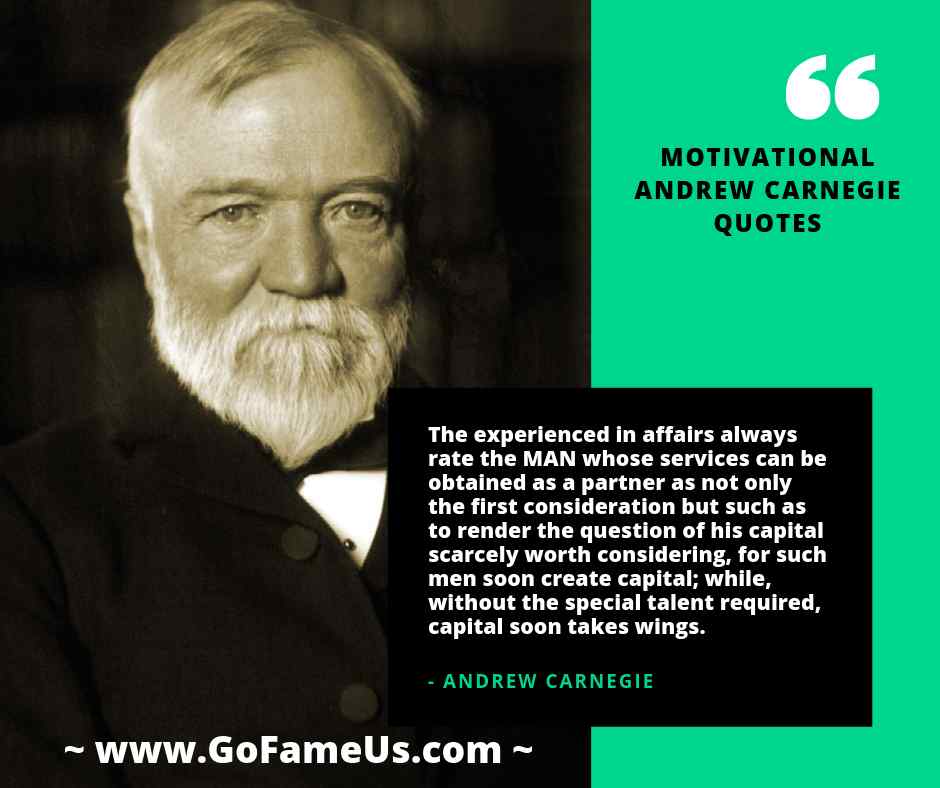 16. “The average person puts only 25% of his energy and ability into his work. The world takes off its hat to those who put in more than 50% of their capacity, and stands on its head for those few and far between souls who devote 100%.” 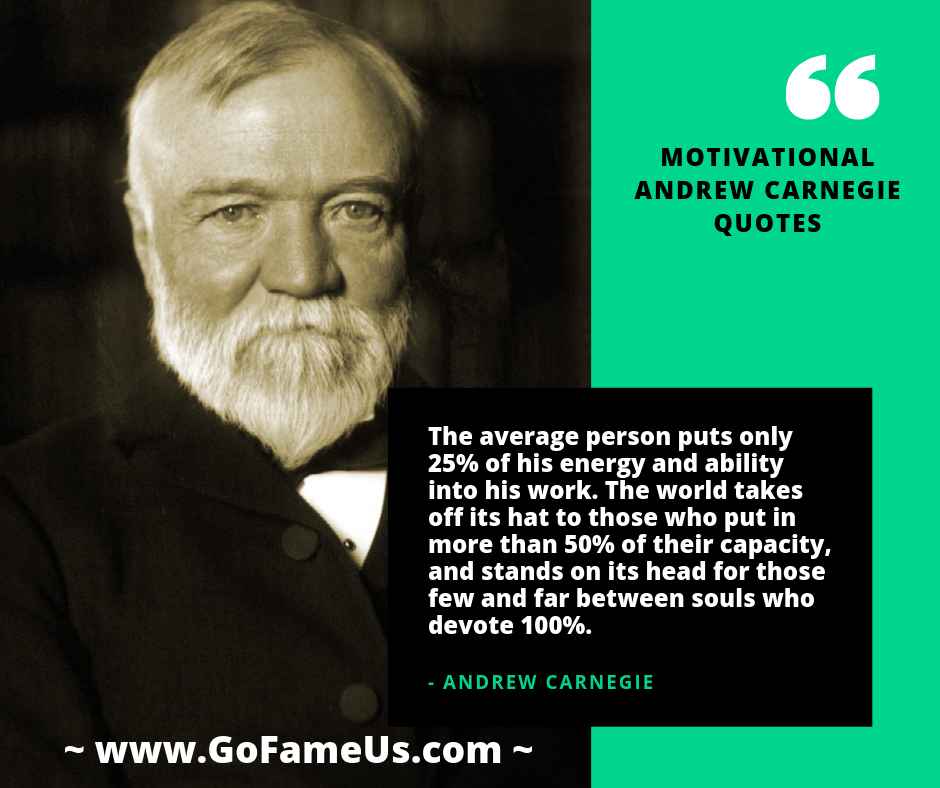 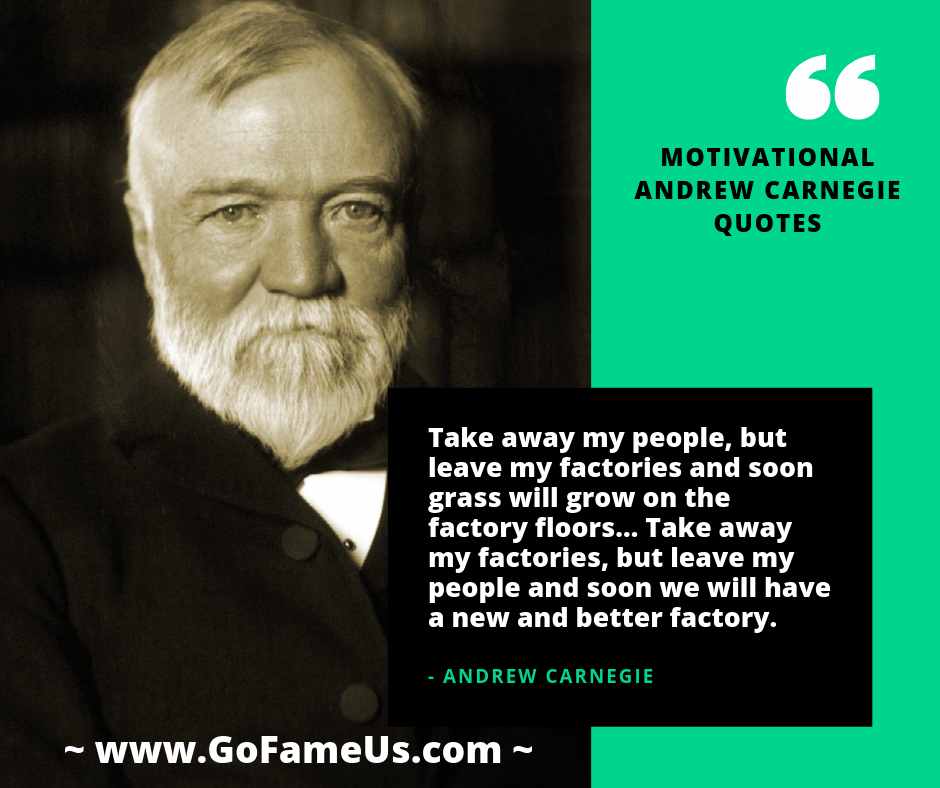 18. “I choose free libraries as the best agencies for improving the masses of the people because they give nothing for nothing. They only help those who help themselves. They never pauperize. They reach the aspiring and open to these chief treasures of the world — those stored up in books. A taste for reading drives out lower tastes.” 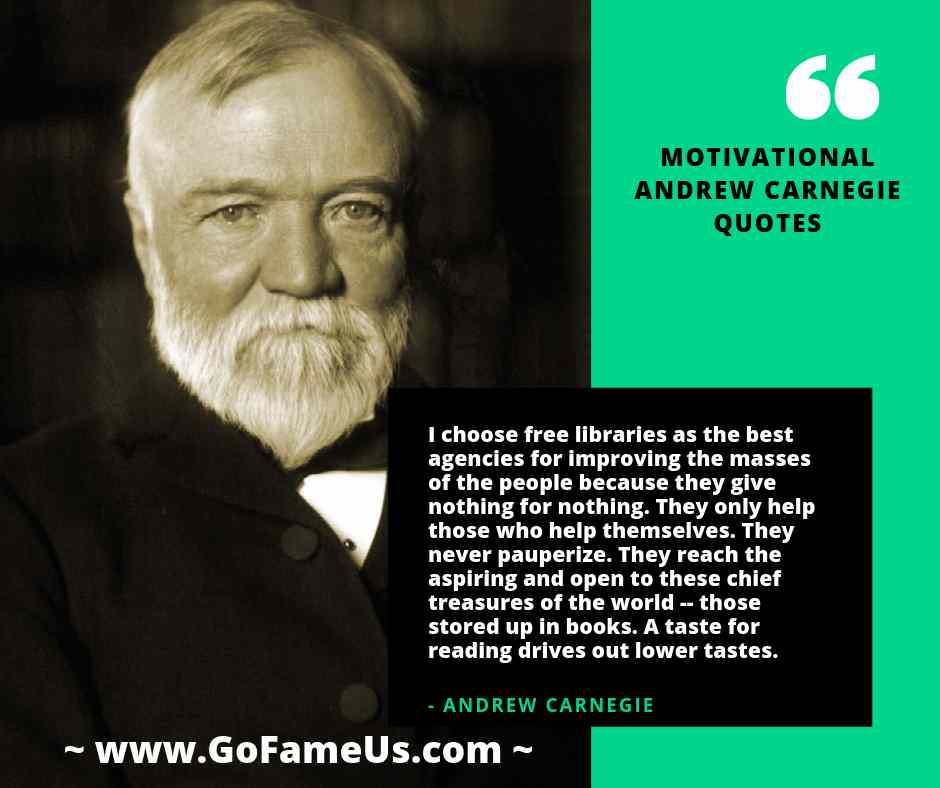 19. “People who are unable to motivate themselves must be content with mediocrity, no matter how impressive their other talents.” 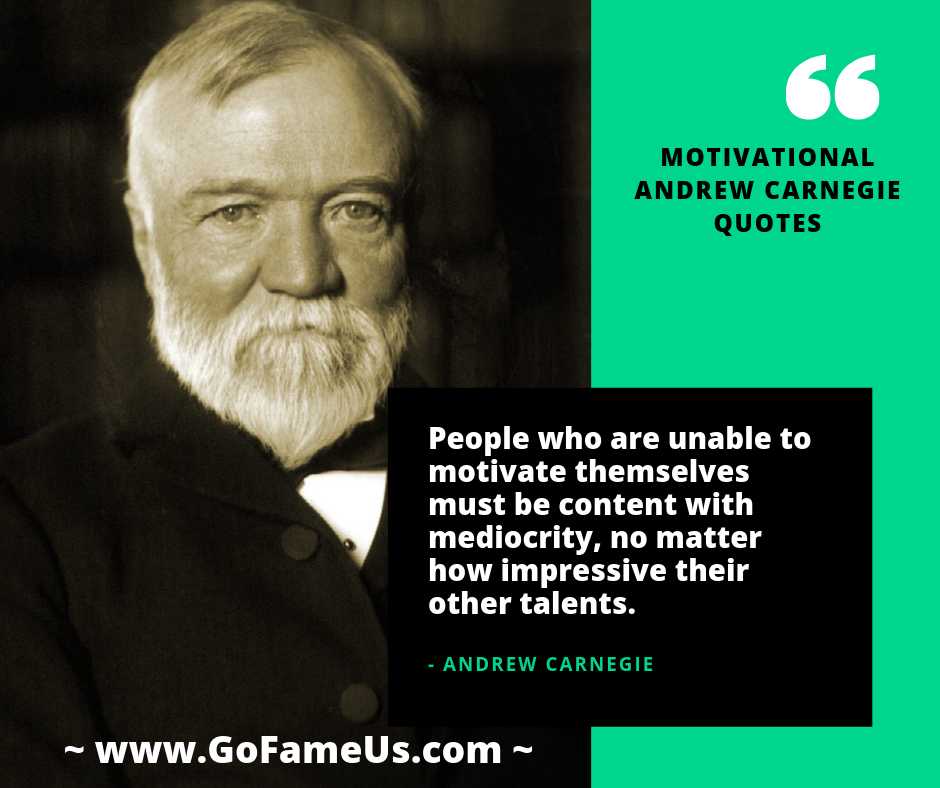 20. “And while the law of competition may be sometimes hard for the individual, it is best for the race, because it ensures the survival of the fittest in every department.” 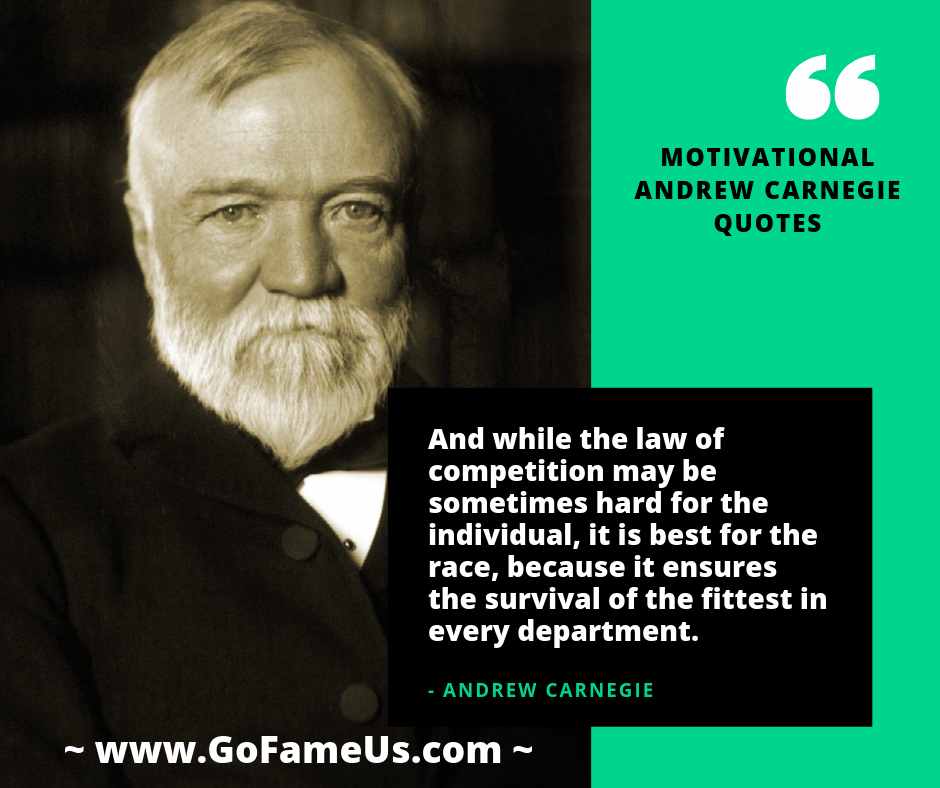 21. “It marks a big step in your development when you come to realize that other people can help you do a better job than you could do alone.” 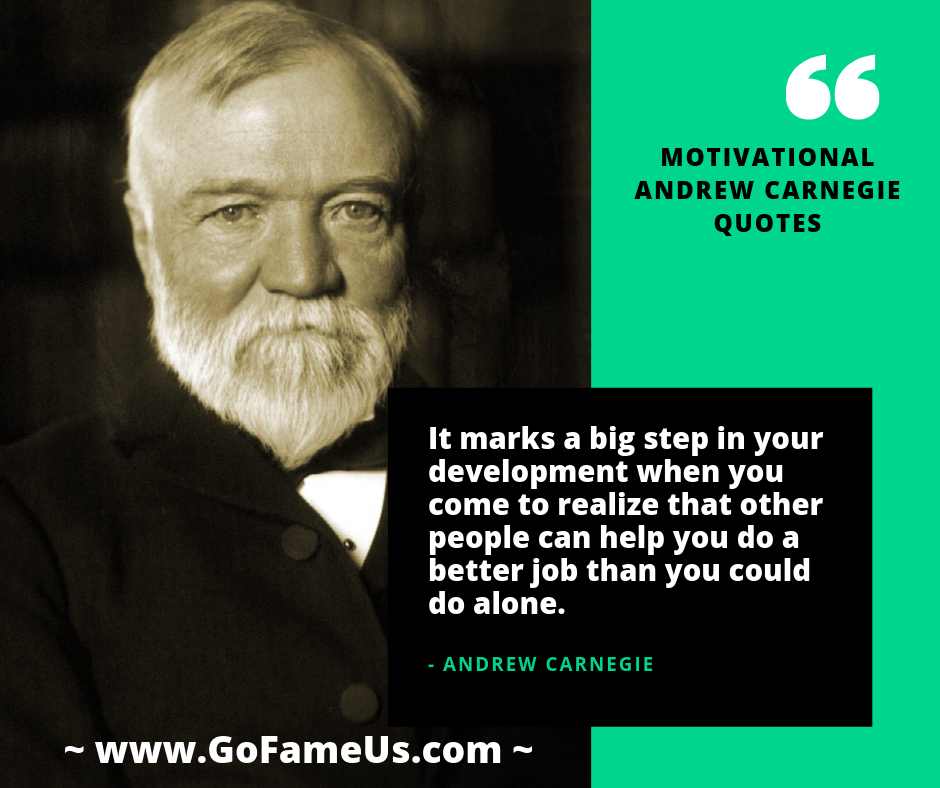 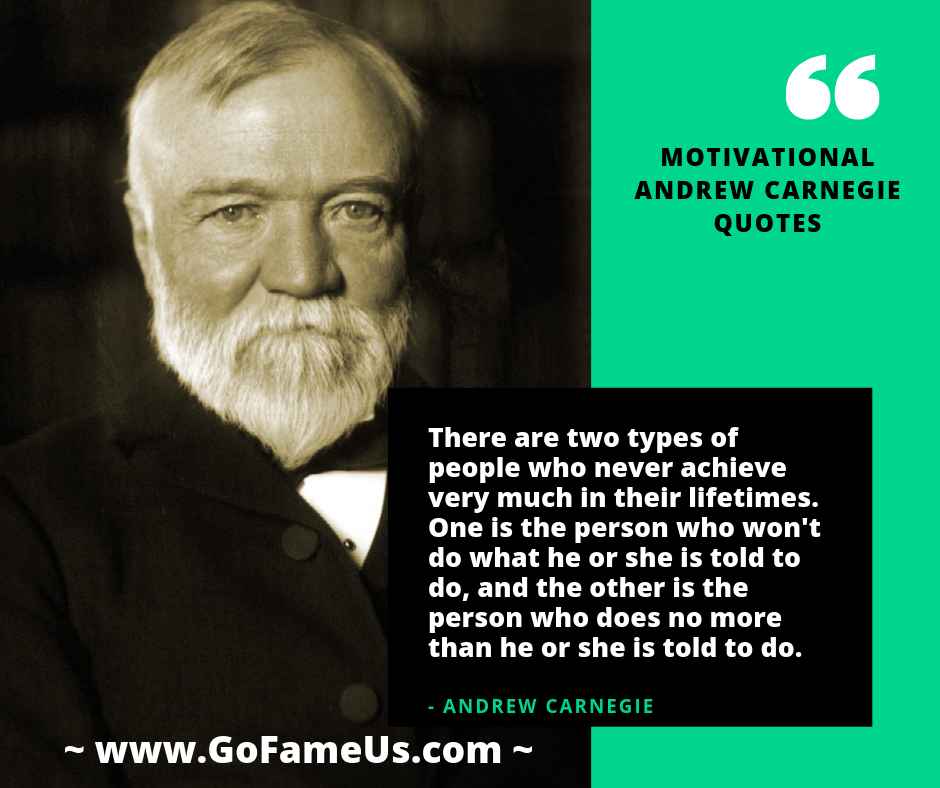 23. “Libraries are reservoirs of strength, grace, and wit, reminders of order, calm and continuity, lakes of mental energy, neither warm nor cold, light nor dark… In any library in the world, I am at home, unselfconscious, still and absorbed.” 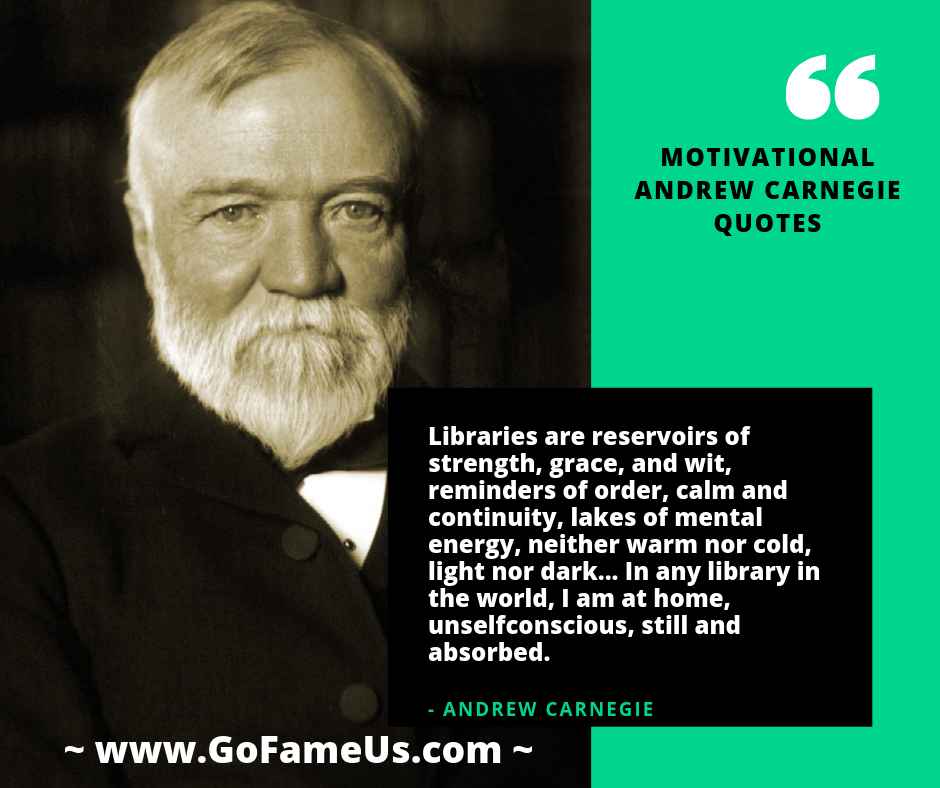 Hope that the above Andrew Carnegie quotes might have given you some motivation for your dream journey. 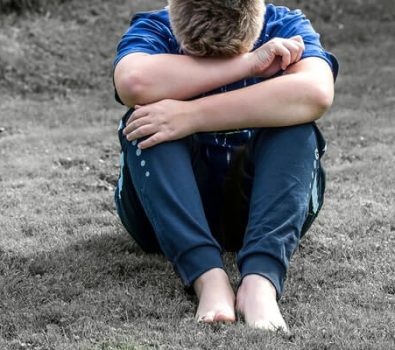